Racism Rears its Head Amid Russia's Invasion of Ukraine 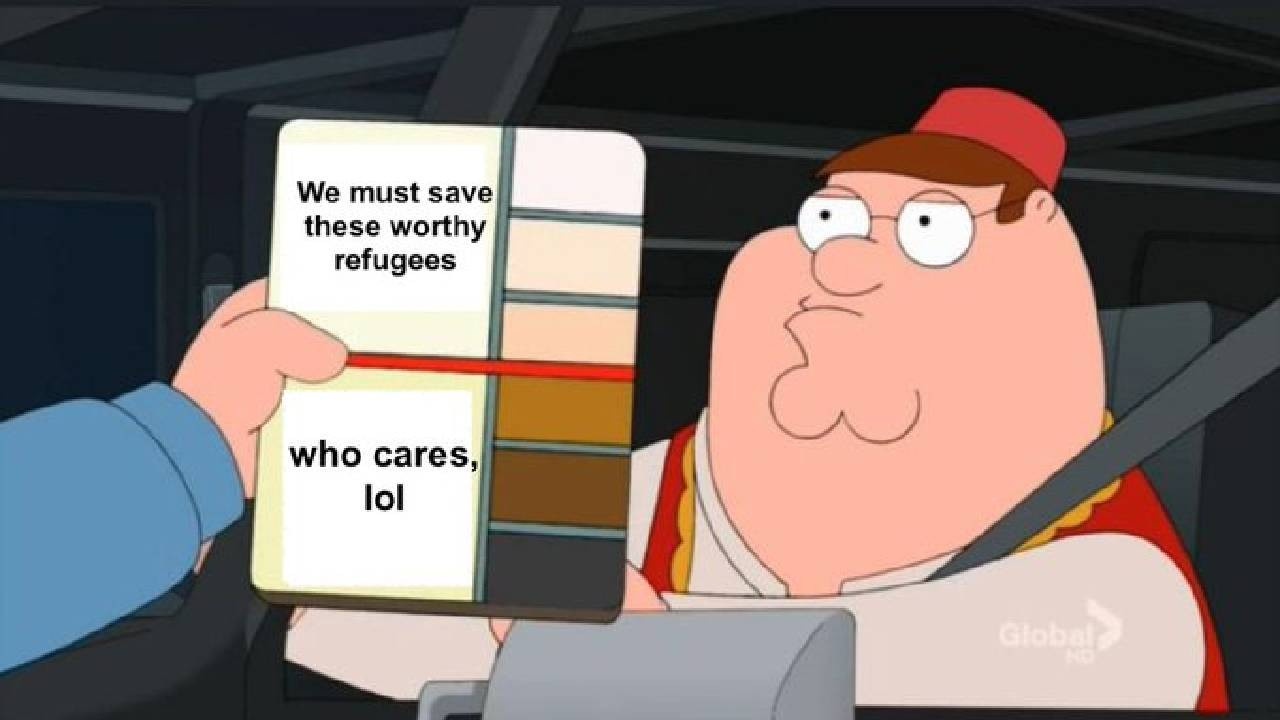 I’m interrupting my series on blame, shame, and guilt to talk about racism in the media. Since Russia has invaded Ukraine, racism from the news media has been on display and people on social media have been quick to document and call them out:

CBS senior foreign correspondent Charlie D’Agata said of Ukraine, “This isn’t a place, with all due respect, like Iraq or Afghanistan, that has seen conflict raging for decades.”

“This is a relatively civilized, relatively European — I have to choose those words carefully, too — city, where you wouldn’t expect that or hope that it’s going to happen.”

If that’s what he says when he’s choosing his words carefully, what does he say when he’s not?

Disgraced former Ukrainian Deputy Director David Sakvarelidze appeared on the BBC News to appeal for help and said, “It is very emotional for me. I see European people with blue eyes and blond hair being killed, children being killed…”

As if only white people can have European citizenship? I know he’s talking about ancestry and white presenting physical features. This is blatantly stating that he has empathy for people who look European, but not for those who don't.

[Thread] The most racist Ukraine coverage on TV News.

A reporter in Poland stated, “"The unthinkable has happened...This is not a developing, third world nation; this is Europe!"

"now the unthinkable has happened to them, and this is not a developing third world nation, this is Europe" pic.twitter.com/Lcx6QKO6n7

British journalist and former pro-Brexit politician Daniel Hannan wrote in The Telegraph, “They seem so like us. That is what makes it so shocking. War is no longer something visited upon impoverished and remote populations. It can happen to anyone.” 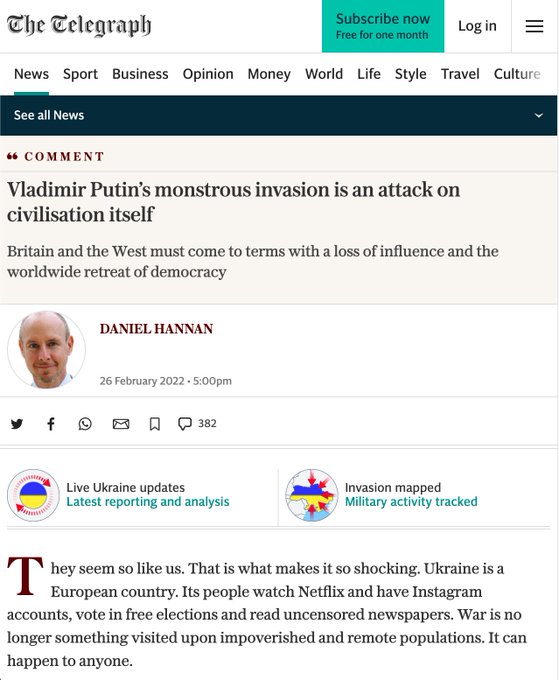 Al Jazeera English anchor Peter Dobbie said it was “compelling” that the refugees appeared to be “middle-class people.”

What I noticed in each of these videos is that NONE of the journalists, anchors, or guests espousing racist views received immediate, real-time push-back from the people they were speaking with. Every anchor glossed right over insinuations and explicit statements that white people are more deserving of safety and compassion. They continued the conversations as if the guests and reporters had not just dehumanized Black and brown people around the world.

The journalists who spoke the words aren’t the only ones responsible for these statements. If you’ve downloaded my 7 Words to Know When Talking About Racism (available at the bottom of this post), then you know that discrimination is a personal action that harms people you are prejudiced against. When discrimination is normalized, when it is part of how society operates, that’s racism. That’s systemic.

So many journalists of European ancestry having the same talking points demonstrates a systemic issue. Some of these comments were not ad libs. They were written and published, meaning they went through editors and an approval process before being put into print or stated on air.

These are the people who are framing the news we consume. If they are framing this invasion as white people are more civilized and more deserving of sympathy and support, then how are they framing national and local news in ways you don’t even notice?

In the middle of all the racist sentiments from world news organizations, the real impact of those beliefs is happening in Ukraine. There are reports from Black and brown residents in Ukraine that they are literally not being allowed to leave so that white people can get to safety first or because neighboring countries don't want to accept Black and brown bodies. There are videos that I won't post here of Nigerian and Indian people trying to get on trains out of Ukraine being pushed, kicked, and blocked from boarding.

Some on social media are saying they are calling for women and children first. But why aren't Black and brown women and children allowed to get on the train at the same time as white women and children? Others are suggesting that Black and brown people should have gone to their embassies to arrange travel. Can anyone with that mindset seriously believe that in the middle of war, thousands of Black and brown people should be processed through an embassy while white people have the luxury of just walking across the border, even if they don't have papers? Nobody is asking the nationality of the white people. They are getting out of Ukraine and into other countries based on their race, not their nationality.

CNN producer Bijan Hosseini shared his sister's story of escaping Ukraine. What she thought would take 7 hours (and a pricey $700) to reach the nearest border turned into 4 1/2 days and thousands of dollars to reach safety. She was charged high prices for transportation, ended up walking in freezing weather and having to abandon her luggage to travel faster, was injured and hospitalized, and more. 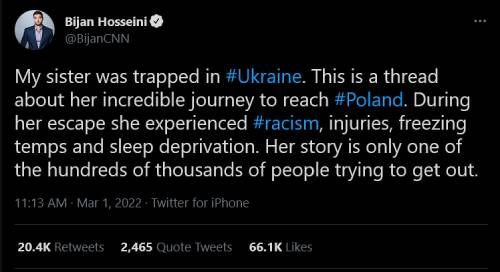 This is his adopted sister from Sierra Leone. 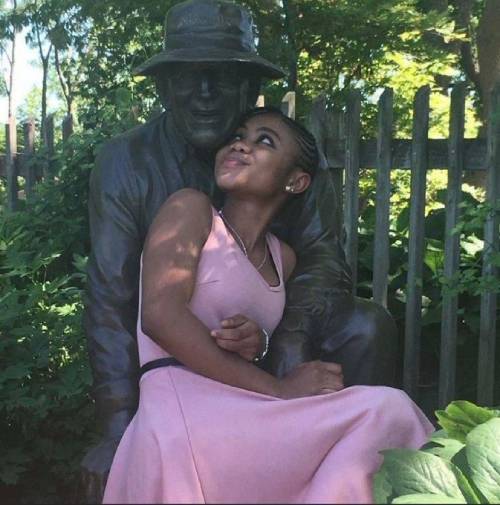 Hosseine's Twitter thread includes pictures and voice messages from his sister and you can feel her fear throughout the thread and you hear the anger when she finally arrives by bus at the Polish border and someone orders "all Blacks" off the bus before the bus will cross the border. Luckily, the white people on the bus said that the Black passengers had paid their tickets and should cross, too. That allyship helped get her and her companions to safety.

Once the bus finally made it to the border (the same border she was at two days before) someone announced that “all blacks” needed to get off. My sister and her friends, bravely, refused to get off. pic.twitter.com/MoeHZtTYSE

This reporter explains that Poland is willing to accept Ukrainian refugees when they wouldn’t receive Syrian refugees.

“Just to put it bluntly, these are not refugees from Syria. These are refugees from neighboring Ukraine. That, quite frankly, is part of it. These are Christians. They’re white. They’re very similar to the people who live in Poland.”

This was the coverage on why Poland is now openly accepting refugees:

Again sympathies with Ukrainian people but look how deeply racist Western media is, and they set high moral and democratic standards for themselves. https://t.co/mzfgpyE9mS pic.twitter.com/31hy9ufRz0 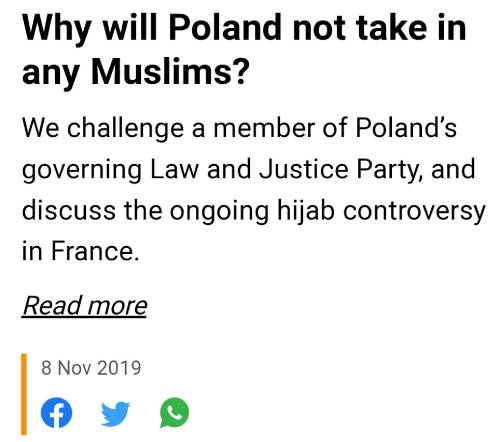 Poland welcomes Ukrainians, even without ID, and they can bring their pets! 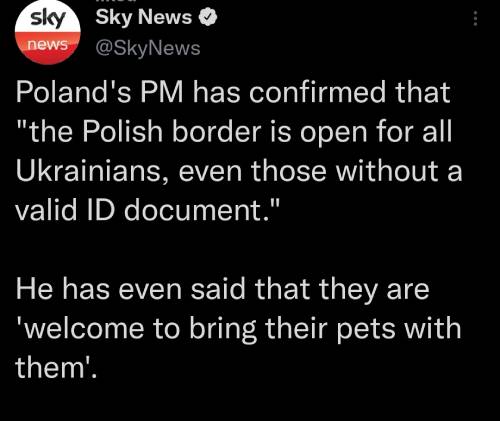 Slovakia is offering healthcare, food, free transportation, and the possibility of work to Ukrainians. 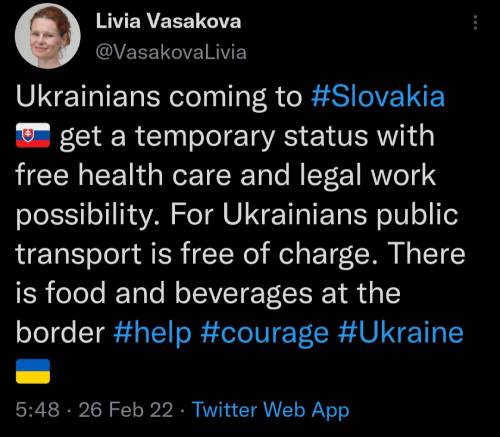 These offers must be for those of Ukrainian ethnicity, not Ukrainian citizenship status or residency, because Black and brown people are being stopped at the border.

These are the mindsets and behaviors that maintain patriarchy, racism, and other types of oppression: this need for power over others, this need to make yourself feel better by believing someone else is less worthy of compassion, this underlying belief that you won’t be able to thrive if everyone has an equal opportunity. 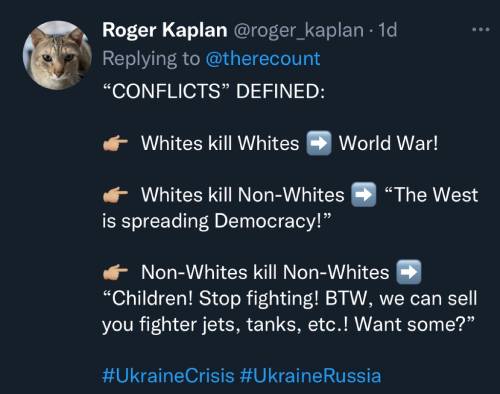 How do we overcome this? By making antiracism a habit. That means recognizing and calling it out when you see it. In media headlines and commentary. In your family. At your workplace. In your community.

The only way this changes is for you to get comfortable with discomfort so you can learn how the system works and do your part to challenge it every time you see it. Ready to get started? This month in Inspired by Indigo we're talking about anti-Blackness in the Know Your Facts pillar. Learn how addressing racism and ignoring the specific harm done to Black people can still perpetuate racism. If you don't help those at the very bottom of our caste system, have you moved the needle? Join us to learn how to let go of blame, shame, and guilt to make antiracism a habit.