Navigating Racism to Get a Breath 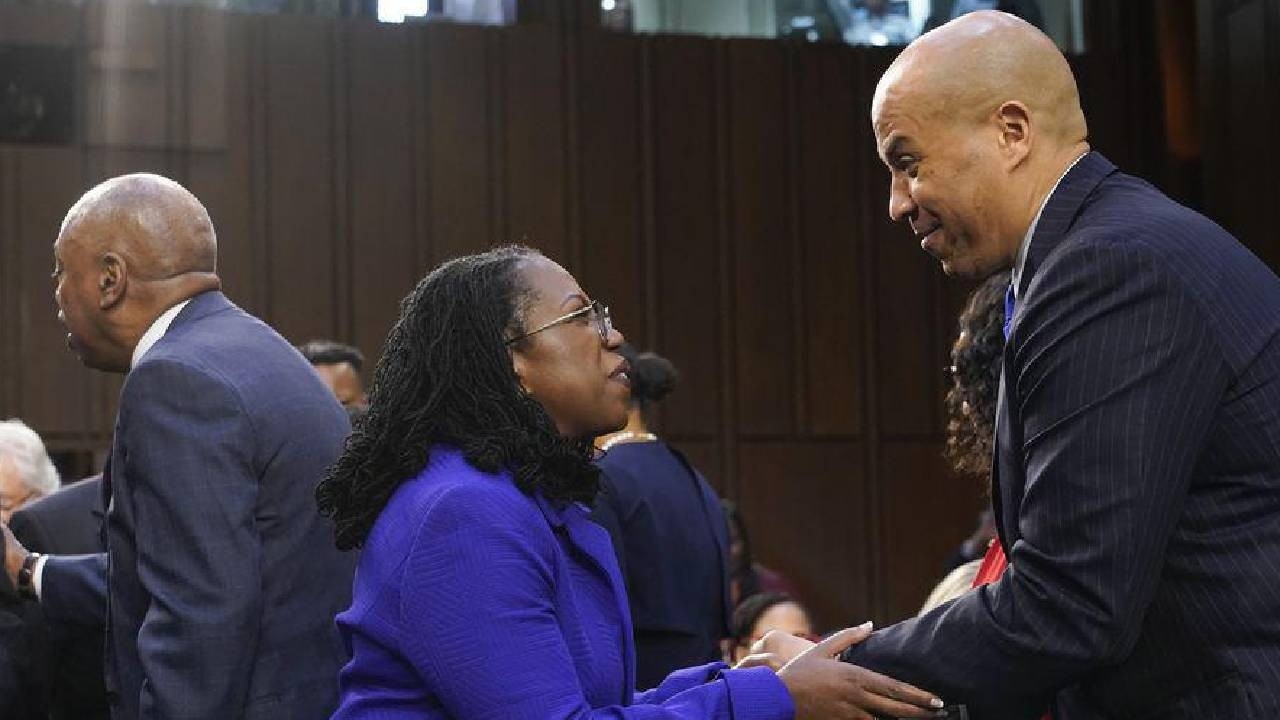 It’s common knowledge for Black folks and other people of color that we have to be twice as good to get half as much. And if you’re a woman, misogynoir means you have to be more than twice as good. Cory Booker (D-NJ) speaking about Judge Ketanji Brown Jackson’s road to the Supreme Court nomination said, “You got here how every Black woman in America who’s gotten anywhere has done. By being — like Ginger Rogers said, ‘I did everything Fred Astaire did, but backwards in heels.’”

Jackson received the highest rating from the American Bar Association – well qualified, and received bipartisan confirmation to the U.S. Court of Appeals just a few months ago.

And I still wasn’t surprised at the Republican attacks, lies, and feeble attempts to smear Judge Jackson as something that she isn’t. The senators were performative because they had nothing of substance to talk about.

Lindsey Graham (R-SC), one of three Republicans who voted to confirm Jackson to the Court of Appeals, stormed out of the hearing after attacking Jackson for doing her job as a public defender assigned to detainees at Guantanamo Bay. (Public defenders don’t get to choose their clients, and according to the Constitution, EVERYONE charged with a crime must have access to counsel.)

Ted Cruz (R-TX) attacked Georgetown Day School, which one of Jackson’s daughters attends and where Jackson serves on the board, accusing the school of teaching CRT because it includes antiracism books on its reading lists. (Critical Race Theory (CRT) is a way of understanding how American racism has shaped public policy. It was developed by legal scholars in response to the idea that the U.S. had reached racial equality after the Civil Rights Movement.)

The GOP jumped right on this idea, posting the gif below that crosses out Judge Ketanji Brown Jackson's initials and writes CRT in their place:

After three days of outrageous, bad faith questions and grandstanding by Republicans, I could see (and so could many others according to social media posts) that Jackson was getting tired.

Disrespect from the Media

In addition to the hearings, Jackson also faced racism from the mainstream media who couldn’t be bothered to learn how to pronounce her name, even as they speak the names of Ukrainian cities and soldiers with ease.

Now, they know they wrong for mispronouncing her name like this. pic.twitter.com/pPkSeWoPEc

Side-eye from Some of the Black Community

And the side-eye she’s been getting from Black folks who don’t trust the fact that she’s married to a white man - as if fighting against systemic racism means you have to dislike and distance yourself from all white people. Those folks are getting push back. 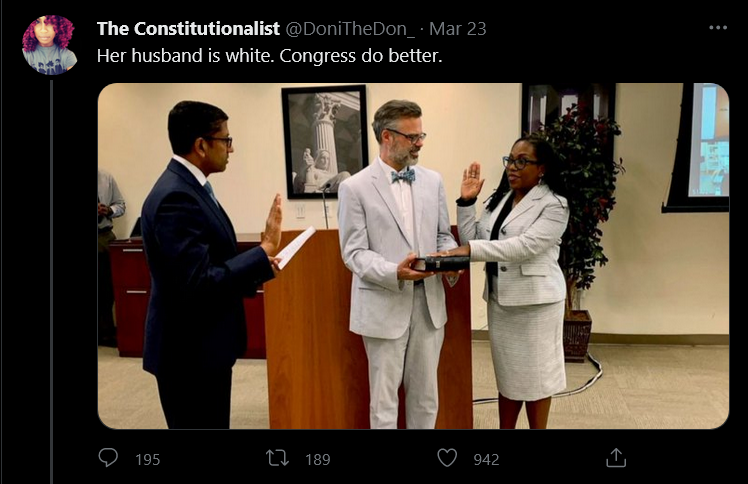 Jackson has more direct experience in various aspects of the law than any sitting Supreme Court justice. She literally worked her way up through the ranks unlike those currently sitting on the Court and many who came before. Out of the 115 people confirmed to the Supreme Court:

But the men and women in the GOP question her qualifications? None of the current justices have served as public defenders. Only one served on a sentencing commission. And only one other was a district judge. 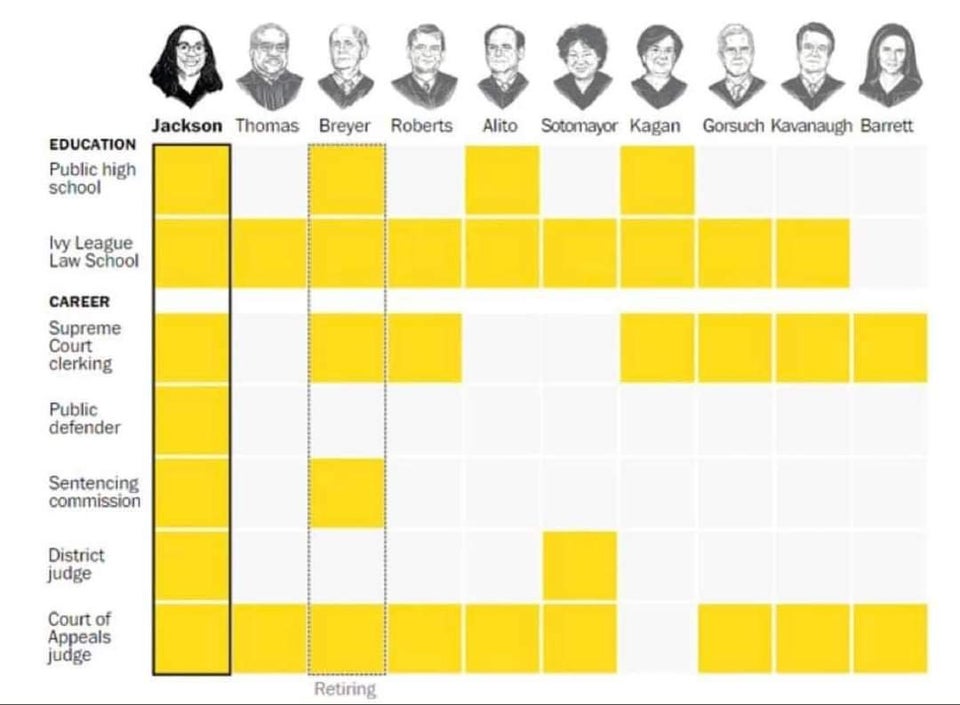 Diversity on the Court Matters

Of the 114 Supreme Court justices in U.S. History, all but six have been white men. Four have been women, two have been Black, and one has been Hispanic. None have been openly gay, and as far as I know, none has had a visible disability. Studies have shown that true diversity makes a huge difference for organizations:

among other things. If the benefits are this good for corporations and nonprofits, it only makes sense that it would benefit our government. Without representation, how are they qualified to rule on cases that none has experience with? They are outsiders judging communities they don't understand and often have no connection to. And the white supremacist, patriarchal system is designed to keep it that way. People supporting the system have no interest in understanding anyone who is outside their comfort zone or making space for people who would shift the power dynamics.

She was attacked with lies and remained stoic and patient in the face of toddler tantrums designed to elicit an emotional response. Contrast that with the theatrics used to give cover for Brett Kavanaugh’s tears, meltdowns, and lies in response to credible allegations of rape and obvious deceptions about his high school and college behavior. And her restraint was still cause for criticism from the right. 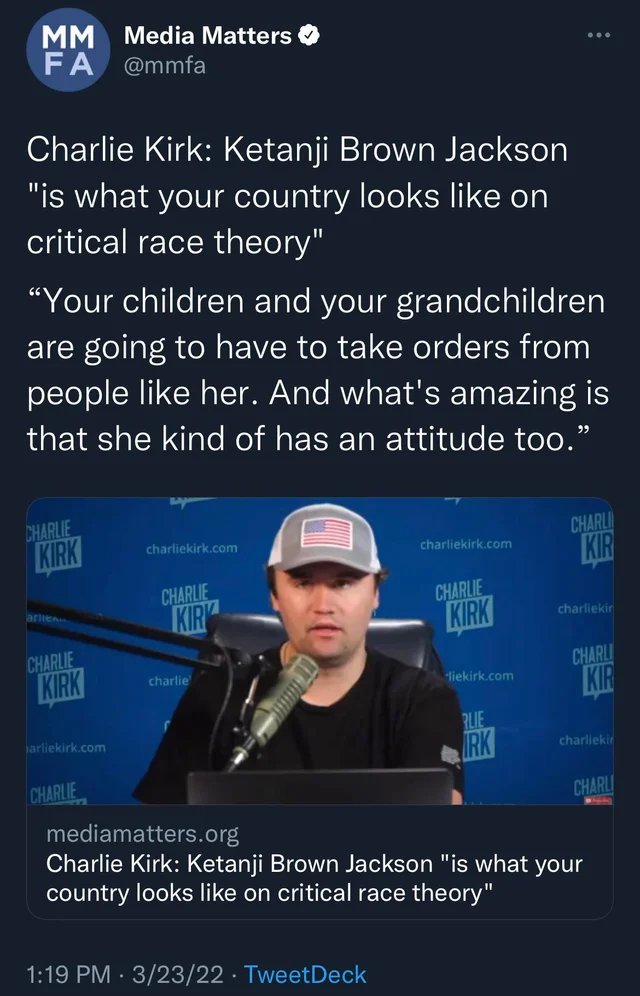 “Your children and grandchildren are going to have to take orders from people like her. And what’s amazing is that she kind of has an attitude, too.”

In other words, as a Black woman, she doesn’t know her place. Black people aren’t supposed to have positions of power. And the fact that she’s confident in her knowledge and worth means she’s “uppity.” People on social media were quick to call it out. 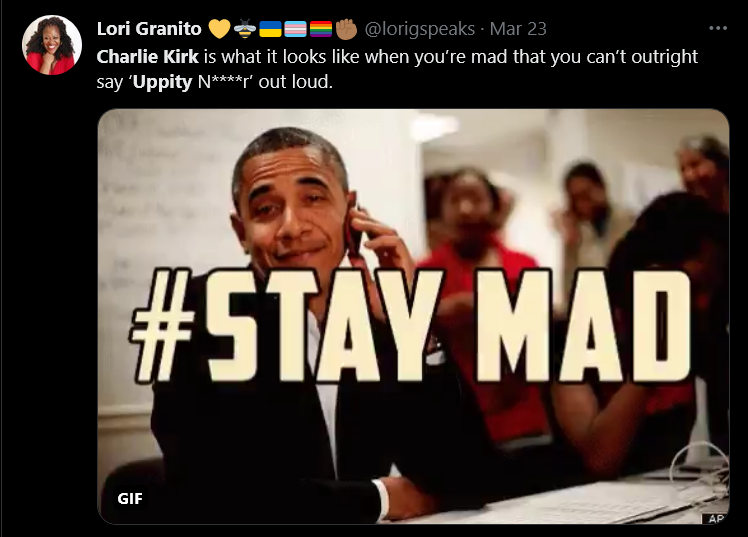 On Day Three of the hearing, after almost 50 hours of testimony, with six senators left to question or otherwise harass Judge Jackson, Cory Booker (D-NJ) protected her. He used his time to let the world know that he saw her, to remind her why she was there, and to let her know that she was not alone. He didn’t question her. He used his time and words to let her breathe, give her a small space to feel her emotions, and then pull herself together for the last few hours of the hearing.

Judge Jackson wiped away tears. Senator Booker was choked up. People around the country posted that they were crying along with them. And others were angry that Senator Booker thought Judge Jackson needed protection and at the way he blocked for her.

The senator said, you are “so much more than your race and gender.”

He talked about his joy at her nomination and how his constituents and others are beyond excited about her service. Referring to the bad faith arguments lobbed by the GOP, he said, “Nobody’s gonna steal that joy!”

This is a common response from Black folks in the face of bigotry and discrimination, especially in the religious community. Choosing joy and forgiveness in the face of discrimination can serve as mental and emotional protection in spaces where Black folks and other people of color don’t have the power to express a range of emotions without repercussions. It can also give white supremacy a pass by not holding people accountable for their bigotry.

When I have been angry about racism and a talked about retaliation instead of forgiveness, several liberal white folks have told me that one thing they admire about Black people is our ability to forgive and that they were disappointed that I didn’t have the same attitude. Without even thinking about it, they were trying to invalidate my feelings, convince me that I should choose what was easiest for them, and calling that a virtue. White people in general are afraid of Black anger and feel more comfortable when we’re happy and forgiving. Black people have a right to be angry and confront people who disrespect us based on the color of our skin.

Some critics wanted Booker to be angry. They questioned whether holding onto joy in the face of racism is real or covering justifiable anger. They contrasted his joy to the anger and disdain the white men and women of the GOP lobbed at Judge Jackson for being a Black woman, especially since she is imminently more qualified to be a Supreme Court Justice than anybody who is refusing to vote for her confirmation.

People also took issue with Senator Booker referring to Senator Kennedy (R-LA) as brother and earlier praising Tim Scott (R-SC) for a speech because their actions harm Black people and other people of color, and they don’t operate in good faith. Cory Booker consistently tries to touch the humanity in Republican senators, not acknowledging that they don’t see him and people like him as equally human. (Yes, Tim Scott is Black. Power and success within the patriarchal, capitalistic system can influence people choose money and self-interest at the expense of community. Add internalized oppression or the desire to be a model minority, accepted and lauded by powerful people in the dominant caste [until you aren't], and the expense of your own community becomes a way to distance yourself from other Black folks and people of color.)

Booker affirmed Jackson, saying “You have earned this spot. You are worthy.”

He talked about how despite facing racism, Black people have still loved and served this country, determined to make this society love us back. He talked about how the Irish were denigrated before they were accepted as white. He spoke about the Chinese being used as near-slave labor to build American railroads and still carving out a space for themselves in the country.

These comments rubbed some people the wrong way because no other race or ethnicity has been declared property. When people compare chattel slavery to the way the Irish were treated in America, they gloss over the fact that the Irish and others have been able to become white (through shifting definitions of whiteness) or position themselves as white adjacent (usually by distancing themselves from Blackness).

Booker said, “There is a love in this country that is extraordinary…They didn’t stop loving this country even though this country didn’t love them back.” He talked about the hidden figures that don’t get recognition because we don’t teach our country's full history in schools.

He quoted Langston Hughes’ poem, Let America Be America Again, about how the American dream has never truly been available to Black folks. Click here to read the entire poem. Here’s a snippet:

O, let America be America again—
The land that never has been yet—
And yet must be—the land where every man is free.

The land that’s mine—the poor man’s, Indian’s, Negro’s, ME—
Who made America,
Whose sweat and blood, whose faith and pain,
Whose hand at the foundry, whose plow in the rain,
Must bring back our mighty dream again.

Sure, call me any ugly name you choose—
The steel of freedom does not stain.
From those who live like leeches on the people’s lives,
We must take back our land again,
America!

O, yes,
I say it plain,
America never was America to me,
And yet I swear this oath—
America will be!

Senator Booker said, “Don’t worry, my sister. God has got you.” And then went on to talk about why Harriet Tubman is his favorite historical figure.

Even with all of Senator Booker’s good intentions and his experience as a powerful Black man (who is still a tiny minority in the elite space of the Senate), navigating a highly charged public display of racism and misogynoir was like walking a tight rope. He was never going to please everyone. But what’s important is that he held space for Judge Ketanji Brown Jackson to breathe and gather herself for the last few hours of her ordeal.