Is the Supreme Court Being Unduly Influenced? 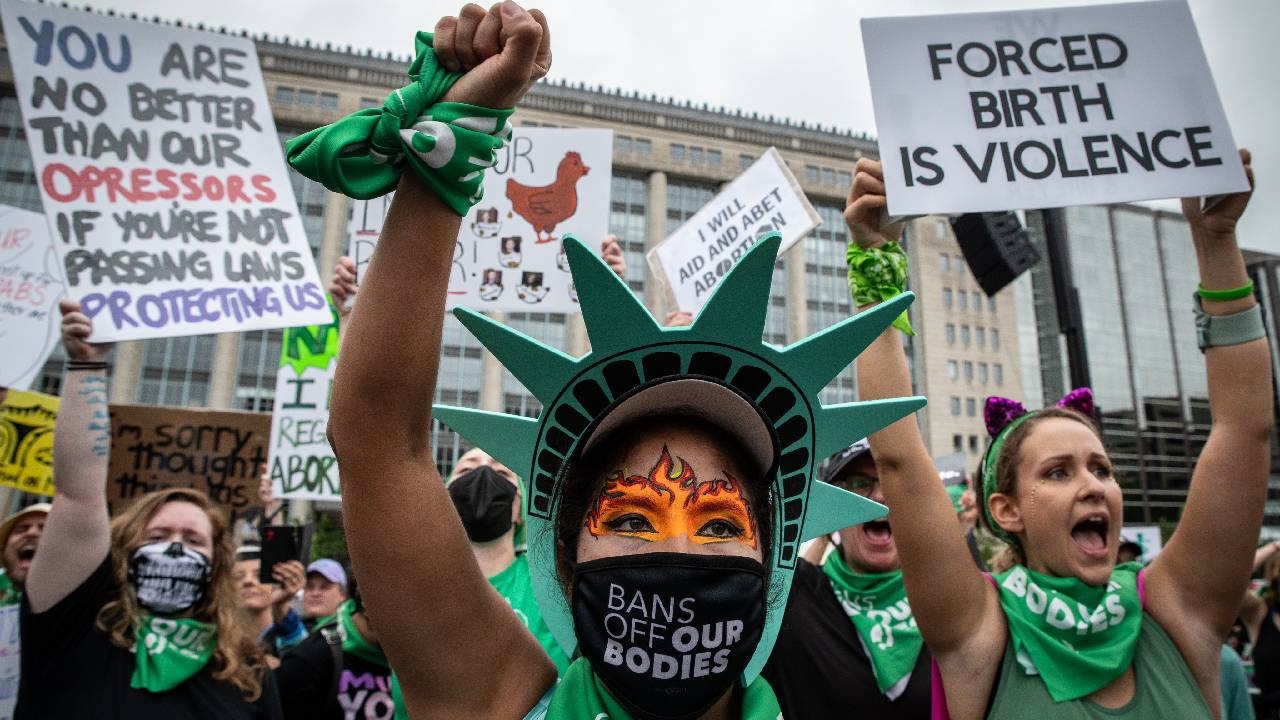 As Americans protest the gross overreach of the Supreme Court as it takes rights away from citizens (which is historically significant because before now the Supreme Court has expanded human rights), GOP-led states continue to pass legislation designed to dehumanize marginalized groups and promote minority rule through fascist policies.

In just a few weeks the Supreme Court has handed down rulings that overturned national access to abortion by leaving the decision to the states and revoked a state’s right to limit who can carry a concealed weapon.

Adding this for context on why they chose the WH instead of Capitol Hill, where most of the large abortion rights demos have been. WM exec. director: “We know there are limits to Biden’s authority, but we want him to push his authority to that limit.” pic.twitter.com/FKOsBPVx0Y

The behind-closed-doors influence that so many suspected was happening with the Supreme Court was confirmed when Politico published a story on a former leader of a religious right organization. Rob Shenck described how for more than 20 years (1995-2018), he arranged for wealthy couples from around the country to “visit with and entertain conservative Supreme Court Justices.” As part of “Operation Higher Court,” those couples were coached by his organization, Faith and Action (now called Faith and Liberty), to use particular wording to give their opinions on upcoming cases without specifically naming a case. The couples donated money to the operation, some of which was used to establish an office located directly behind the Supreme Court building. Shenck said he used prayer sessions to create a sense of community with conservative judges. He has since left the religious right because of their aggressive tactics in opposition to abortion and their support for gun rights.

Supreme Court Justices are very removed from interactions with everyday people and have made themselves even less available in the wake of overturning Roe v Wade. They have put up a high fence around the court and requested new legislation protecting their privacy (ironic since they are requesting the very kind of privacy the Supreme Court denied to patients and staff of abortion clinics and because they voted against the more personal privacy of bodily autonomy for half the country).

Conservative justices like Brett Kavanaugh feel intimidated just knowing that people are protesting his decisions nearby, even if he can’t see or hear them. He recently went to dinner at Morton’s and protesters gathered outside. Even though he couldn’t see or hear them, he left out the back door without having dessert. Rightwing media pundits like Peter Doocy complained about the lack of privacy without grasping the absurdity of their grievances.

Social media quickly pointed out that the justices argued that there’s no right to abortion in the Constitution, so where is the right to dine in public? Pete Buttiegieg expertly explained that peaceful protest is a right on Fox News:

The Wisconsin state Supreme Court has upheld the legislature’s bid to restrict voting rights by declaring that more than 500 ballot drop boxes around the state - secure installations that “are designed with anti-tampering measures, affixed to the ground, made with durable materials, and often monitored by video surveillance” and that have been used for years - are illegal. Absentee ballots must be mailed or delivered directly to the election official’s offices. They cannot be delivered on anyone’s behalf. This will:

Arizona just passed a law that civilians cannot record police activity from less than 8 feet away. It goes into effect September 24. (A previous version of the bill banned anyone from recording from less than 15 feet away.) Proponents justified this as protection for law enforcement, but it’s an obvious way to limit police accountability. Most people record from a distance. What’s to stop an officer from walking towards the person with the phone to close the gap and then charge them with violating the law (which is punishable by a fine and up to 30 days in jail)?

As written, the law makes exceptions for a person being questioned, an occupant in a vehicle during a traffic stop, or people on private property where law enforcement activity is happening. But if only the person involved with the police can record, then they lose that ability once they are handcuffed or in a physical interaction. How would George Floyd have recorded his own murder? And with a law like this in place, the officers who protected Floyd's murderer Derek Chauvin would have been able to cite the bystanders every time they approached the crowd. This law does protects law enforcement - from accountability, not from harm.

Big things are happening around the world as well.

Former prime minister of Japan Shinzo Abe was assassinated Friday, July 8 as he gave a speech just days before a parliamentary election. The country was shocked because Japan has extremely restrictive gun laws. The assassin used a homemade weapon, has confessed according to law enforcement, and wasn’t motivated by politics. He apparently was angry at an organization that hasn’t been identified and believed Abe was part of the group.

Shinzo Abe’s party won a supermajority in parliament, which gives them a chance to fulfill his ambition to reform the country’s constitution. The current Constitution renounces war, and Abe wanted to amend it so the country can become a military power. How will that shift world power dynamics?

Sri Lanka is enduring its worst financial crisis in 70 years. Government decisions over the last decade about borrowing and interest rates created massive debts and plunged the value of the rupee. Residents don’t have enough money for basics like food and fuel. Many items are being rationed and people wait in long lines for what they can get. Civilians are fighting with police and military in desperate attempts to get food and medicine. Early this month, the Energy Minister said the country has less than a day’s fuel left. Fewer trains are running, making it difficult for people to get to work, to the hospital, and anywhere else they need to travel.

The government has tried to stifle protests with tear gas and water cannons, by giving authorities the power to detain without a warrant, instituting curfews, and blocking social media platforms. But the people have been protesting for the last three months anyway.

Over the weekend, thousands of protesters marched to the president’s official residence and seaside office as well as the prime minister’s official residence, demanding their resignations. They set fire to the prime minister’s residence. No immediate injuries were reported from the fire. At least 39 people, including two police officers were hospitalized during the protests. Both men escaped to safety and have agreed to step down.

Lawmakers have agreed to elect a new president from those staying in their positions but have not settled on a new prime minister. Protesters have sworn to occupy the presidential palace until a new government is in place. They have been swimming in the pool

WATCH | A viral video also shows people having a bath in the swimming pool, built at the Presidential palace of #SriLanka. Prez Gotabaya Rajapaksa has fled from his residence#SriLankaEconomicCrisis #SriLankaCrisis #GlobalNews #Economy pic.twitter.com/214AHhLp5Y

If Sri Lanka doesn’t get its economy on track soon so that the people can survive, will other countries come to their aid and how would they do it?

There is so much going on in the world that we need to pay attention to. But we don’t have to know all the details to be informed, and we don’t have to know everything.  (I certainly don’t.) As always, especially if this news calls up anxiety, remember to breathe from your belly, move your body, and bring yourself to the present moment. Sending fierce love!